In comparison to the vast annals of history of Western liquors, Japanese liquors have spanned a considerably shorter period. However, don’t be fooled by this seemingly short span of time - in the past 90 odd years, Japanese liquor producers have proven themselves time and time again in the international scene, keeping toe to toe with some of the oldest, most prominent and established Western players.

In recent years, Japanese liquors have seen an increase in popularity globally, and Singapore is no different. The influx of large Japanese outlets such as Don Don Donki has introduced Japanese liquors to the public pallette. This has since thrown the liquor enthusiast community into disarray - we have since been spoilt for choice.

But what exactly is so brilliant about Japanese liquor? Japanese whisky has its origins from the 1910s, during which one of the fathers of Japanese whisky, Masataka Taketsuru learnt the trade from distilleries in Speyside and Campbeltown, Scotland. Upon his return to Japan, the first Japanese distillery - Yamazaki, was established on the outskirts of Kyoto in 1923 in collaboration with Shinjiro Torii. Eventually, Taketsuru set off to build the Yoichi distillery in Hokkaido in 1934. These first two distilleries - now known as Suntory and Nikka respectively, are still the leading powerhouses in the Japanese scene.

Unlike other conglomerates of Scotch whisky such as Diageo, Suntory and Nikka do not have dozens of distilleries, but only four between them. This low number of distilleries, in addition to a no-trade policy between both companies, greatly limit blending options. Therefore, each distillery started utilising different distillation techniques.

Through numerous permutations of unorthodox stills - varying in shapes and sizes, an assortment of yeast strains, peated and unpeated barley, fermentations, and cask options such as mizunara and sherry casks, distilleries have managed to maintain a wide variety through consistent adaptability. 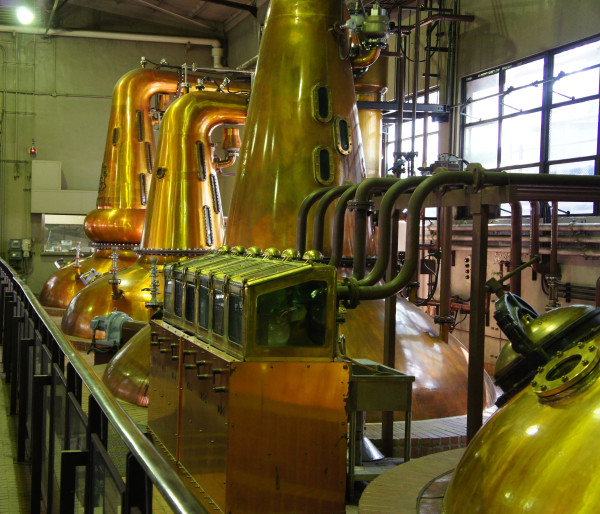 Stills and drums of various sizes contribute to the multitudes of single malts that any single Japanese distillery can produce. (via japanese-whisky.com)

Similar to their Scottish cousins, Japanese whiskies mostly utilise peated barley, albeit less peaty. Peatiness describes a dark, saline, herbal smokiness in the flavour, and is primarily caused by the combustion of mossy decaying plant material which dries and “malts” the barley from which whisky is distilled from. The resulting aroma of the smoke permeates the barley, giving the resulting whisky a distinctive smoky accent.

As with all whiskies, water is integral. It is not uncommon for Japanese distilleries to be placed in virgin, untouched areas as Taketsuru and Torii first did in 1923. Yamazaki, for one, even has their own water source. Japanese distilleries also tend to use Scottish barley rather than Japanese-grown barley; due in part to their respect for tradition, and the fact that the latter aren’t too suitable for whisky production.

These distinct distilling techniques have clearly paid off - in 2001, Nikka's 10-year Yoichi single malt won the "Best of the Best" at Whisky Magazine's awards. Since then, Japanese name brands such a Suntory and Nikka Coffey have been consistently winning top honours in international competitions. Blind tastings organised by Whisky Magazine in recent years have pitted Japanese single malts against malts commonly recognised as some of the top in Scotland, resulting in Japanese single malts - particularly Nikka’s Yoichi and Suntory’s Yamazaki scoring higher than their Scottish cousins.
And the demand for Japanese whiskies has soared since. Possibly to the point that demand is rapidly outpacing supply - making Japanese whiskies some of the rarest in the world. Mixologists have been rushing to stockpile as much as they can get their hands on, while Japanese distilleries have begun producing fantastic blended whisky options to fulfil the thirsty public.

An increase in popularity for Japanese liquors have also piqued the interest of Japanese distilleries to embark on the creation of artisanal gin. Kyoto Distillery released Ki No Bi (meaning “Beauty of the Seasons”) in 2016 - and by doing so became the country’s first Japanese gin to utilise Japanese botanicals such as yellow yuzu, gyokuro tea, and hinoki wood chips.

It’s one thing to discuss the origins of these liquors, but another to know how to appreciate them. If you do happen to be one of the lucky few to obtain some of these fine whiskies, it is important to drink it the right way. More expensive whiskies tend to be drunk neat or on the rocks, blended whiskies are notably consumed in delicious whisky highballs - whisky with soda water or cold water. Gins can be taken in the same way - of course, let’s not forget the classic twin pairing of G&T.

If this blog is making you thirsty, Nikka Coffey Gin and Nikka From The Barrel are sublime entry points into the Japanese liquor scene. The next time you take a sip of some of the world’s finest, remember to enjoy the craftsmanship of decades of Japanese ingenuity.