Extra Strong Beers - What goes into them?

Soju VS Sake - One and the same?

To the newbie, soju and sake may seem somewhat challenging to tell apart, particularly since both soju and sake are clear alcoholic beverages that contain the same ABV; at approximately 14-24%. The similarity in appearance alone is enough to throw off most of the uninitiated. Perhaps unsurprisingly, the differences between both liquors are distinct and extend past their histories. Where exactly do the national beverages of Korea and Japan stand apart? Let’s find out.

Firstly, both soju and sake can be produced from rice. Although soju is traditionally made from rice, other starch-filled products such as wheat, barley, tapioca, potatoes, and sweet potatoes may also be used. On the other hand, sake is made solely of rice. After removing the outer layer of the white rice grain, also known as the bran (which contains protein and oil). Although enzymes are added to break these proteins down to provide a quintessential umami flavour, excess protein and oil lead to a ‘heavy’ profile and lack of a fruity aroma. 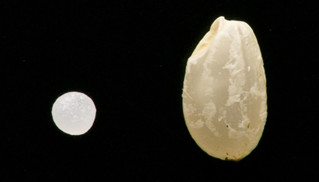 Sake then undergoes a brewing process similar to beer; the starch is converted into sugars before fermenting into alcohol. In contrast, soju has a distinctly different production technique to sake. Soju uses distillation, while sake uses brewing techniques. In fact, the word soju means “burned liquor”, which gives clues to the distillation process. Soju has two stages to its production process. The first stage is the conversion of starch to sugar, and the second is the conversion of sugar to alcohol.

This difference in production techniques results in differences in flavour profiles: sake is often compared to wine (since it is a rice wine), while soju is compared to stronger beverages like vodka and whiskey. In fact, these similarities in taste make soju a handy tool for bars, bistros, and restaurants who don’t really want to get an expensive liquor license but want to continue serving delicious cocktails in their establishments.

These cocktails can range from mojitos, Cosmopolitans, to martinis, Negronis and the Bloody Mary. Weighing in at approximately 15-24% ABV, soju is stronger than beer (4% to 5%) and wine (around 13%) but is almost half as strong as vodkas (which are typically 40% alcohol).

Soju has also gained popularity in recent decades, resulting in various fruit flavours that typically feature lower alcohol content and higher sugars. Unflavoured soju, however, is often seen as suitable for most cocktails and other tasty beverages. While it can be (and often is) consumed neat through shots, soju may also be used in more beverages than the standard cocktails that you find in bars. For example, soju can simply be mixed with other flavoured beverages such as Red Bull. In the summer, soju is commonly paired with watermelon for a refreshing, fruity edge. 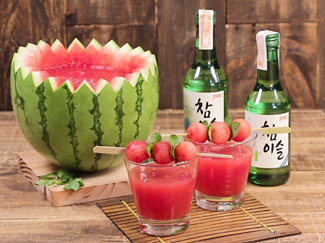 Watermelon soju is often served inside of an actual watermelon. Whaaaaat. (Courtesy ofbitesized.ph).

Recent trends have soju drinkers mixing soju and Yakult for a surprisingly delectable combination. In Korean tradition, soju is also mixed with beer (or maekju) to make ‘somaek’. This is usually accomplished in an ideal ratio of three parts soju to seven parts lager beer in special glasses with special markings.

These glasses are also used in fun drinking games such as ‘Titanic’. In Titanic, a glass is filled halfway with beer and a soju shot glass is placed floating within the beer glass. Then, participants take turns pouring soju into the shot glass – and the one who ‘sinks’ the glass has to drink up. Sounds like a whole lot of fun if you ask me.

Sake is taken in a slightly different manner. Sake is often served out of porcelain flasks also known as tokkuri, poured into small ceramic cups called choko. Sake can be served at room temperature, warm, hot, or chilled depending on the season. However, unlike soju, sake is not commonly mixed with other beverages and is taken on its own.

It’s one thing to read about something, but another thing to try it for yourself. Typically a good entry point to the Korean drink would be something sweeter and delectable, such as a flavoured soju. Sakes may seem to be slightly more inaccessible, but that’s really not the case. We at Cellarbration recommend Bijito Junmai Sake if you’re feeling an itch for some Japan sake. Just remember to drink it right -- don’t just gulp it down in one shot! It isn’t soju! 😉